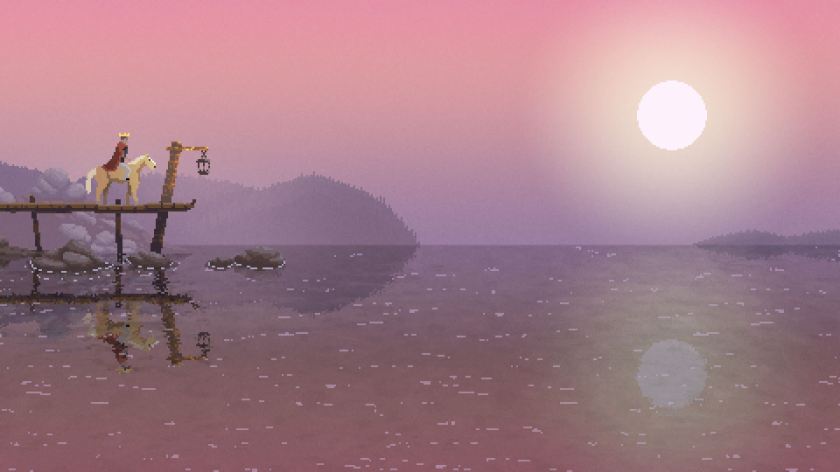 Simple, challenging, and beautiful. Kingdom New Lands is a side scroller that focuses on resource management and self-preservation. The art design of this game is just stunning, with a beautiful pixelated style. You are a queen, and you have only three things: your crown, your steed, and your coinpurse.

Progression comes from investing money into different areas of the island to create watchtowers, walls, farms and more, offering peasants you find on the island a gold coin to join your cause, buying tools for the people to use in order to work for your kingdom, and collecting the profits that are made by the various characters under your rule.

But it isn’t all building and profiteering … once the night comes, it begins. Every night your kingdom will be attacked by gruesome monsters called the Greed. They hunt mercilessly for possessions – they will attack your people and steal their tools, their money, and your money as well if they are able to attack you. But if your coinpurse is empty and you get hit by one of these monstrous creatures? Your crown will be knocked from your head, and if they get their hands on it, it’s game over for you!

I have really enjoyed this style of gameplay, as well as the very real challenge the game offers you. As each day passes by, more and more of the Greed emerge from their portals to attack you, meaning that if you don’t pay enough attention to your defensive structures and army, you will soon find yourself getting overrun – which can be a devastatingly difficult situation to come back from. And this is not the only issue you will face. Eventually, winter will arrive, and your crop fields will die off, leaving your farmers with nothing to do and your kingdom with very little income.

There are a number of different islands, and you can travel between them by rebuilding a shipwreck on the island – something which will require no short amount of gold coins. But once you have successfully got it in ship-shape and docked, you may depart the island at any point to move on to a new island.

There isn’t a whole lot to say about the game, it is a small one after all – but it still ticks plenty of boxes for me. Beautiful visuals, fantastic soundtrack, satisfying challenge.